Do you like Fortnite? Do you like Marvel? Do you want some free Marvel cosmetics in Fortnite? Then keep reading.

One of the most enjoyable elements of Fortnite is the endless collaborations. From music artists and WWE wrestlers to Naruto and Rick & Morty. The possibilities are truly endless. And, of course, we can’t forget about superheroes.

Batman/Fortnite: Zero Point was a special six-issue series where you got to witness Batman teaming up with Fishstick. You can purchase physical copies or read the series online via DC UNIVERSE INFINITE.

Batman/Fortnite: Zero Point gave Fortnite games a treat with every issue. Each issue in the series contains a code. When redeemed, that code unlocks a DC-theme cosmetic in Fortnite. Players receive the following items in-game per issue:

Those who read all six issues and redeem all six codes get one final reward: the Batman Zero Outfit.

Not one to let DC one-up them, Marvel has joined in on the fun this year.

Fortnite x Marvel: Zero War follows a similar formula as Batman/Fortnite: Zero Point. It’s a five-issue series with characters from the Fortnite universe teaming up with Marvel heroes like Spider-Man, Iron Man, and Wolverine. The limited series came out in June, with the final issue released on September 28. You can snag them in person or read digital copies via Marvel Unlimited.

Each issue provides readers with a free Marvel-themed Fortnite cosmetic. But enough with the preamble. Let’s take you through getting all these items because this opportunity is limited-time only.

How To Get Fortnite X Marvel: Zero War Cosmetics For Free

First, you need to sign up for Marvel Insider here:

Next, you’ll have to do a little bit of gaming. Specifically, you’ll need to play a bit of Marvel: Contest of Champions. After downloading Marvel: Contest of Champions, create an account. If you go to the Activities tab on Marvel Insider and select Games, you’ll notice you get 20,000 Marvel Insider Points for doing this.

Next, you’ll need to do an initial completion of the Normal Difficulty Event Quest. Don’t worry; even for new players, this is exceptionally easy. Look up some top-tier MCOC YouTubers like KT1, ContestChampion, and Seatin, so you know to rank up your 3-star Kitty Pryde instead of that 3-star Groot. Leveling up a strong champion will make this go faster.

From here, you have two options:

After you have completed this, you’re in the home stretch.

Go to the Comics section on the Rewards tab on Marvel Insider. At the bottom will be the option to receive one free month of Marvel Unlimited for 75,000 Marvel Insider Points. Redeem this offer. You will shortly receive a code in your registered email. Use the link in the email to redeem the code to get your one free month of Marvel Unlimited. I recommend using Google Chrome for this. I had issues getting the link to work on OperaGX or Brave.

After you’re in, just read the five issues of Fortnite X Marvel: Zero War. Within 48 hours, Marvel will email you a bonus code. Redeem this code via the Epic Games website or Epic Games Launcher. You have 90 days to redeem your code. 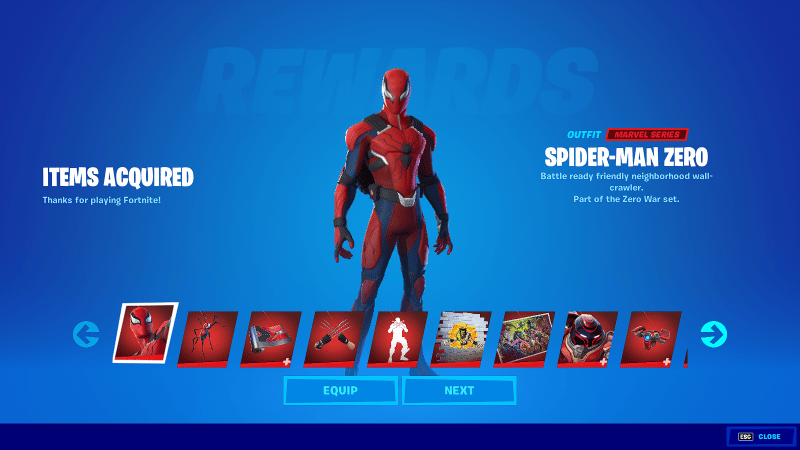 Congratulations! You just got 2,500+ V Bucks worth of Fortnite X Marvel: Zero War cosmetics for free! Well, except one. 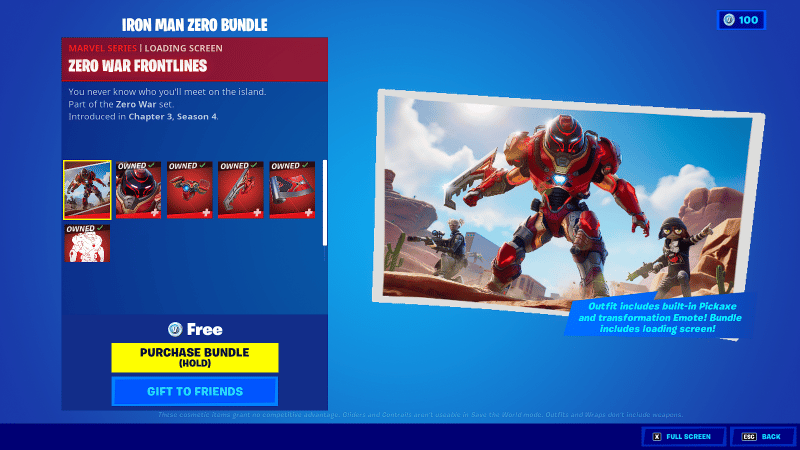 Head to the Iron Man Zero bundle to claim the leftover Zero War Frontlines loading screen. You won’t need to pay any V Bucks to claim it.

Before anyone asks, yes, you can get a 7-day free trial for Marvel Unlimited. But if you look at the official news post from Epic Games about Fortnite X Marvel: Zero War, you can not receive these items during your free trial.

If you go down that route, you have to wait for the free trial to end, pay to continue the service, and only then will Marvel send you your bonus code within 48 hours. But this method works around paying.

You have until October 28 to do this, so don’t forget!

What is going on with North America’s...