Fortnite C3 S3 Leaks – Everything We Know About Season 3

Everything we know so far about Fortnite Chapter 3, Season 3.

The next season of Fortnite is drawing closer, with a live event expected to play out this week. The tanks and loot pool have been fun, but nothing beats the excitement of a new season. As usual, players are awaiting any Fortnite C3 S3 leaks that might give some idea of where it’s heading.

This time around we’ve seen a lot of news about what’s coming with the new season. We’ve got a peek at upcoming skins, Battle Pass, and even some rumors about the theme for Fortnite Chapter 3 Season 3. This is everything we know so far:

The event for Chapter 3 Season 2’s conclusion is going to run on June 4. This is the end of the season’s story and new content, but sometimes not the season itself. Usually, there’s a brief time between the live event and the start of a new season. We can probably expect Season 4 to drop on June 5th, it depends on how Epic’s rollout goes. Downtime or gaps between seasons can get extended though.

Chapter 3 Season 3 Leaks – Everything We Know So Far

Fortnite C3 S3 leaks have been coming in pretty fast as we reach closer to its launch. Some are more plausible or likely than others, but that comes with the territory. These are all of the major leaks, starting with those that are probably a safer bet!

One of the most believable C3 S3 leaks so far has been the Battle Pass. This is a graphic of the Battle Pass and Crew releases on the menu for the new season. This leak looked pretty professional. Some were unsure of its veracity since the Fortnite Crew skin was similar to a past release. However, it’s now confirmed as next month’s Fortnite Crew addition. This seemingly confirms this one of the Fortnite C3 Season 3 leaks. 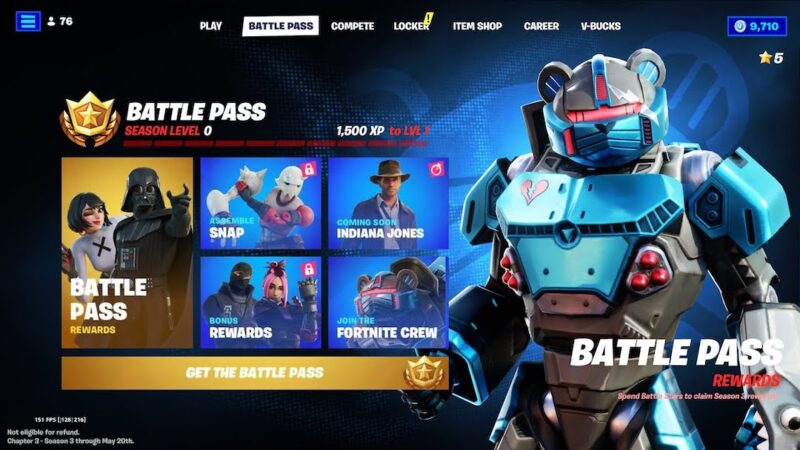 The most interesting element here might be Darth Vader and Indiana Jones! Considering the amount of Star Wars skins in the game, it’s amazing we’ve not already seen Vader yet. Indiana Jones might be more out of leftfield. Star Wars content to tie in with the Kenobi series is already in the store, but Indiana Jones is more random.

The leak also gives a good look here at a number of the original characters that are going to populate this Battle Pass. That includes this season’s customizable skin. This is just the skins for the game in the next season but it’s a nice look at what you’ll be grinding missions for.

One major leak or theory for the theme and direction of the season is Fortnite entering a great drought. This would be a nice mirror of the flooded map that came with Chapter 2 Season 3. In that season, the entire map was flooded. This time, the whole map could dry up with no water. Initially, a lot of people thought this was trustworthy. It was claimed to come from the same leaker as the Battle Pass.

While these changes would be fun, they do seem to have been debunked. This is likely just another person using the same anonymous imageboard to post leaks as the original leaker. That would mean this is more speculation than a proper leak.

SOURCES: There’s currently a 4chan “leak” floating around claiming to include a lot of event and season 3 information – Including that the season is called “Drought”.

This leak is wrong and not based on any insider information.

(Thanks to u/SmugMrMime for confirming this to me)

This one isn’t strictly a Fortnite C3 S3 leak, but a Fortnite x Pac-Man collaboration is coming to the item Shop just before the new season. This latest crossover brings one of the oldest icons in gaming to the store.

No Build Mode could be the biggest contribution from this season to the game’s legacy. It might be missing the core mechanic but No Builds has been a hit with players and content creators. There are already some events like Twitch Rivals and one hosted by Dr Disrespect. However, it hasn’t had dedicated competitive game modes until now.

The Fortnite No Build Competitive game mode is now in the files with a recent update. This was discovered by a Fortnite dataminer. It might be a while before it’s activated, but existing in the files is a pretty clear indication that something is coming on this front.

No Builds hasn’t been for everyone, but it seems like it’s here to stay. Competitive will give fans more opportunities to play the type of Fortnite they love. As long as the game remains popular enough to fill all these different lobbies quickly, more choice is never a bad thing.

Another major Fortnite C3 S3 leak is the return of Naruto skins and cosmetics! These have leaked thanks to some challenges spotted in the game’s data for June.

Outside of actual Fortnite C3 S3 leaks, there are some changes we can expect. We’re probably going to see most of the war-themed elements toned down now that its season is over. The tanks, IO fights, and other seasonally-themed elements probably won’t be carrying over into the next season. Although if this applies to the POIs like the Command Cavern and The Collider is currently unknown. The latter would definitely be fun to keep around given how briefly it’s been in the game.

Those are the major Fortnite Chapter 3 Season 3 leaks we’ve seen ahead of the release. There have been some more minor drops like skins that’ll come at some point in the future, along with some unbelievable claims and poor photoshops! These are the main things to watch for as we get closer to a brand-new season though.

Virtus.pro round out roster with n0rb3r7 and fame signings