Texas is getting ready to play Dota, and we’re playing fortune tellers.

As anyone who even exaggeratedly calls themselves a Dota enthusiast is well aware, the Arlington Major is upon us. It hasn’t even been three months since the last major, but with The International set for October 8th, there’s but a slice of a window to place another Major in. This is that window, and the 17 teams slated to participate in the event are as ready as ever.

The tournament isn’t without its issues. For starters, there are crippling visa-related problems. Many teams are having to play with one or more substitutes, and China’s Xtreme Gaming have backed out entirely. On top of that, Riyadh Masters ended barely a week ago, and with its $4M USD prize pool, overshadows the relatively measly $500k USD prize pool of the Arlington Major.

However, professional Dota is extremely TI-centric. With hundreds of DPC points up for grabs, teams and their fans will be no less — if not more — concerned about this competition. With that in mind, we’ve been brave enough to make predictions for the event, from the Group Stage right down to the Grand Final. However, let’s take a look at the tournament format first.

Esports tournaments are notorious for having oddly-structured tournament formats, and the Arlington Major is no different. The teams will be split into two groups of 9 and 8, with 12 of them moving forward from the Group Stage and into Double Elimination Playoffs. Eight teams will start in the Upper Bracket, and four in the lower, and they will duke it out until only one team remains standing. 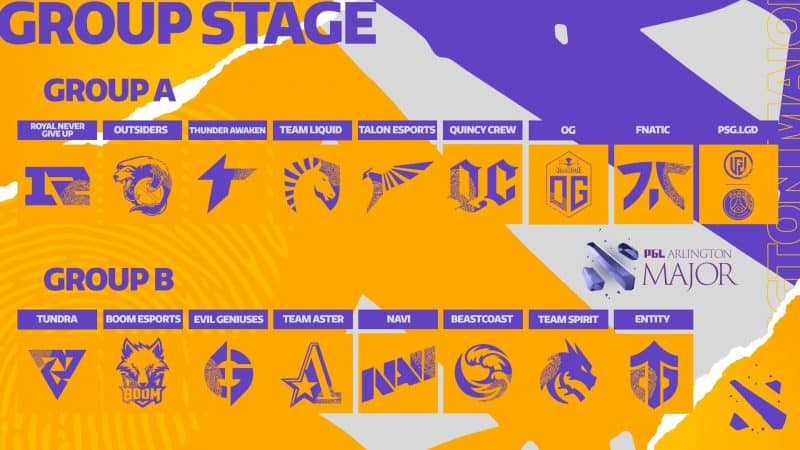 With the top teams in the world, you can be sure that there will be intense action, incendiary performances, and incredible upsets. It’s nearly impossible to correctly predict the entire standings of the groups, but we’ll do what we can.

Arguably the tougher of the two groups, and not just because of the extra team involved. PSG.LGD are fresh from their success in the Riyadh Masters, while OG will be keen on avenging their own downfall to the former in that tournament. Virtus.Pro-turned Outsiders has done a stellar job in rebuilding its broken ranks, with Team Liquid also looking to reclaim its glory days.

Royal Never Give Up (RNG) have been riding high as of late, and cannot be underestimated even with a replacement Carry. Quincy Crew, who have always stumbled at bigger events, will have a point to prove, but they’ve got Peruvian powerhouse Thunder Awaken and the talented SEA squad of Talon Esports to worry about. Arguably the weakest team in the group is Fnatic, who have been putting up subpar performances for years and will have to play this tournament with a whopping three stand-ins.

Our Prediction: We see PSG.LGD taking the group by storm, with a Sebastian “Ceb” Debs-powered OG taking second place. RNG come next, and we think Outsiders will beat Liquid to fourth place. Liquid and Talon will be the last teams to qualify, and unfortunately for them, we believe QC, Thunder Awaken, and Fnatic will all be eliminated.

Despite having two absolute bulldozers in the form of Team Spirit and Tundra Esports, this certainly looks like the relatively easier group. Apart from them, Boom Esports are a great threat to any team that gives them the slightest leeway. Beastcoast have always been a bit of a giant slayer, and are one of the most exciting teams to watch.

Team Aster consists of some solid veterans, but they will have their hands full with the likes of Evil Geniuses lurking around. Entity are a motley crew of brilliant players who have a few good stories from regular DPC matches, but need a strong major run to get people to take them more seriously. Finally, Natus Vincere are back in a major tournament after what seems like an eternity, and will be giving some of the oldest Dota 2 fans something to reminisce about.

Our Prediction: Aster will surprise a lot of people by taking top spot with Tundra following close behind. EG will come next, with Spirit — never the best in the group stage — closing out the top bracket slots. Beastcoast and Boom should squeeze through, with Entity and Na’ Vi falling by the wayside.

The gruel of the group stage will be a thing of the past, with the pressure of the main stage taking its stead as a source of anxiety. What will follow are 17 high-octane BO3s, and one mind-warping BO5.

There are certainly some bold predictions in there, with a few that may sound outright absurd strewn in. Regardless of what happens, we wish all the teams and fans the very best of luck. May the best team win, with the caveat that the team in question may not be yours!

These are the qualified teams for the 2022 LFL summer split